Something odd about Woolwich incident 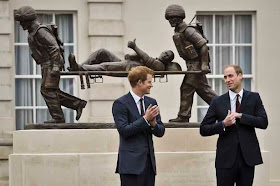 The British public are invited to see war casualties as inevitable and almost as a good thing -  proof of our heroism.  Unfortunately, it is all just proof of people's gullability.  False terror is continually being laid on to sustain our belief in the matrix placed around us.

Closer to home, something not right about this:
http://truthfrequencyradio.com/exclusive-london-beheading-hoax-confirmed/

Truth Frequency Radio
Two men allegedly beheaded a solider in the streets of London today, in what is being described as a “brutal coordinated attack”. The perpetrators gave an interview after the fact, stuck around for about 20 or 30 minutes until police arrived, speaking to bystanders and were of course killed by the police AFTER they were in custody.
The world is all a stage. . Call me jaded, cynical, skeptical or even out right crazy but this event has all of the same earmarks as the Sandy Hook, The Boston Marathon Bombing and so many recent events. The stage is a some-what well organized area, actors seem to be placed in strategic areas waiting for their cue and once again we see the remarkable absence of blood. The story is also full of anti-Islamic propaganda even going so far as to claim the “perpetrator” yelled “Allahu Ahkbar” just before beheading the man.

TAP OPINION -  Too much tomato sauce.  Posturing in front of camera with machete.  Not quite real.  Probably a distraction event to take pressure off Cameron with his collapsing level of support.

Expect more of the same.  Terror.  Drama.  Gory pictures.  It's like Boston Marathon all over again.  Mind control victims sent into action.  All done for maximum PR effect.

COMMENTS -   What possessed the person filming this maniac to get that close??? If I

saw some lunatic who had just hacked a man up in the street, and he is STILL

holding the weapons, I think I'd be moving in the opposite direction!

footage is ever so convenient and in the news studios in seconds too.

Cannot see any blood on clothing - especially jeans?? Surely there would be blood everywhere in such an
attack?

There is also a woman pulling shopping cart ambling right up behind this nutbag.

Also cannot see any scuffing / tyre marks on nice white kerbstones in any footage.... There are 2 black
lines behind car in the 'interview' film... they look particularly strange anyway.

Also if car hit that sign with enough force to totally cave in the front end - why is the post PERFECTLY
upright ??

Posted by Anonymous to the tap at 8:46 pm

grs from the Netherlands.
Don't let these fucks divide you (and Im not talking about muslims)

the guy looks somalian to me btw.

Posted by Anonymous to the tap at 9:45 pm

Anonymous has left a new comment on your post "Something odd about Woolwich incident":
I completely agree THANK GOD some people in the world see sense. The story does not add up at all!
I strongly believe its yet another way of making islam look bad in the media. Why Cameron feels so
threatened about islam that he has to make it look so bad.. i really don't know! Islam is about peace, not
this nonsense muslims are not taught to be ruthless killers.

Flaws in the story:
- Car accident and the relationship of the murder (you either have one or the other)
-The police took 30 minutes??? I have seen them take 3 minutes with complaints of neighbourly
disruption
-How are people standing next to him in a comfortable way
-How can a murder (with blood on only hands) suddenly have time to be a star on camera... i would have
thought he would try to run as fast as he can
-Everything doesn't link with the Anti-islamic headlines, had to throw in that he said God is Great madness.

WHY the sudden blame on it being islam related?

Very insecure to be constantly making muslims look bad.... Illuminati motives all over!!!!!!!!

Posted by Anonymous to the tap at 9:47 pm

Anonymous has left a new comment on your post "Something odd about Woolwich incident":
That same aircraft was seen as i was going to the tube station (west london) at 8 am.... Must have been a
rehearsing

Posted by Anonymous to the tap at 9:54 pm

Anonymous has left a new comment on your post "Something odd about Woolwich incident":
the idea that people believe government needs a falseflag to distract people always amuses me, i dunno if
you live in the same UK as me but most people do not give a fcuk anyway, no need for a false flag as long
as alcohol is cheap, greggs is open and 'reality TV ' is on at7pm on a sat.

Anonymous has left a new comment on your post "Something odd about Woolwich incident":
Anyone notice the South London accent? The lack of blood splatter on clothes or face? Why would this
woman challenge two crazies armed with weapons and had done this? Sniff, sniff smell like BS.

Anyone think that these two may have watched the Terrorist in Syria hack a Syrian soldier to death and cut
his heart out to eat it? A Syrian soldier, protecting his country from Armed Terrorists. Armed by the UK Govt!!!!

It's a terrible atrocity that has happened but it is also an outrage that this Govt. is sending British Troops to
do Zionist/American work in the ME. And taking our taxmoney to arm terrorists in Libya and Syria!!!!!!!!!!!!!!!!!!!!!

Anonymous has left a new comment on your post "Something odd about Woolwich incident":
Everyone on Facebook and social media jumping on the bandwagon here. Quite sad how easily people
become racists / islamaphobic and filled with hate.

People who no doubt normally count themselves among the moderate, suddenly sounding like seasoned
EDL members, doesn't' take much for people to start calling for a fascist police state.

Tap - the idea that Cameron can call on false-flag events at will to during low point seems a bit unlikely.

Surely the whole idea that these kinds of terror plots could be stage managed / state controlled is a few
steps up from 'government and party politics' and managed on a need to know basis in the realms of
military/intelligence.

I havne't even bothered watching the news, makes me too angry when all the usual conclusions are jumped
to and the same mental/emotional abuse of the media to fill people with terror and disbelief.

I've come to the point where i just turn off to terror attacks, the holes in the story are there straight away and
only get worse, yet never discussed or examined by the MMS.

It all seems to be escalating at the moment.

Anonymous has left a new comment on your post "Something odd about Woolwich incident":
This is so fake its obvious, yet because the big voice speaks (the media, social sites) we the little people
won't be heard.

Why is it the perfectly filmed video is only media edited and controlled, no actual raw footage and the car scene is absolutely fake. I had a car accident driving at 35mph, the lamp post got damaged. The level of damage on the car doesn't match-up with the posts outcome.

I'm no Muslim but I can see the blatant setup. The media says a thing happens and like blind faith with no substantial evidence we believe them. London has more cameras than any nation. So proof isn't hard to attain!

To trigger fear in the general public is to also trigger fear in the hearts of many Muslims who will now be distrusted and distrusting. Fear brings violence equaling the plan of the government. Order out of chaos. NWO. Be careful people let love prevail. Don't loose site of who we are as people. We in England have heart, all who are here.

Don't bow to the Media Manipulation.

Now I get it. Now I understand why there are Muslim preachers shouting out religious dogma in the streets of WOOLWICH - it's been transformed into an open air MIND CONTROL THEATRE - so that the army squaddies who go out for beer and chips at night have something 'to hate'... Now I get it - it is a MIND CONTROL tactic - so that the troops who live at the Woolwich Barracks will have an image in their mind of their mate who was axed to death - its a MORALE BOOSTER designed to help those troops HATE muslims and prepare them for combat in Muslim countries where the Queen steals their oil.